At the same time as the Tokyo Olympic and Paralympic Games, a zelkova (Japanese elm) bonsai tree owned by former Prime Minister Shigeru Yoshida will be available for public view for the first time. The tree was displayed at the “Bonsai Suiseki Ten (Tokyo Olympic Memorial Exhibition)”—hosted by Tokyo Metropolitan Government, co-sponsored by Nippon Bonsai Association, at Hibiya Park—in 1964.  (A-118) 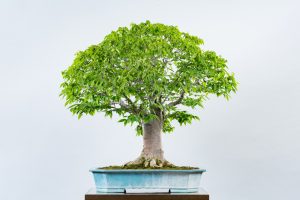 History of the tree (excerpt)

・Around 1933: A zelkova tree was collected from the garden of a farmer in Koshigaya, Saitama Prefecture and planted in a flowerpot in Kaminari-en, a bonsai garden which was later relocated to Omiya Bonsai Village.

・1953: While Yoshida Shigeru was in Omiya to promote the election of Kenji Fukunaga, ex-Speaker of the House of Representatives, he visited Kyuka-en. He mentioned that he was quite interested in the zelkova tree. When Fukunaga heard about this from someone else the following year, he bought it and gave it to Yoshida as a gift.

・1955: The tree was displayed at the 30th Kokufu Bonsai Ten (Japanese Style Bonsai Exhibition) and gained popularity since it was owned by a prime minister.

・1964: The tree was displayed at the Bonsai Suiseki Ten (Tokyo Olympic Memorial Exhibition).

・1967: The tree was given to Kenji Fukunaga after Yoshida died. After Fukunaga died, it was inherited by his son and ex-member of the House of Representatives Nobuhiko Fukunaga and was taken to Kyuka-en garden.

・March 1970: The tree was displayed at the Bonsai Suiseki Ten (Osaka International Exposition Suiseki Exhibition) hosted by the Japanese government.

・April 1989: The tree was displayed at the First World Bonsai Convention in Omiya City (currently known as Saitama City).

・March 2015: The tree was donated to Saitama City (the Omiya Bonsai Art Museum) by Nobuhiko Fukunaga.